The Slater Mill is in Pawtucket, RI., next to Providence. I went to one of their ghost tours on an evening nearing Halloween. There are two large, amazing buildings from the late 1700s for the Mill, but the Sylvanus Brown House was moved onto the property from its original location. On the second floor a small bed in the corner grabbed my attention.

I had a very strong urge to get into the bed and curl up in a fetal position. This feeling was intense, and I had to focus on self control. The only light in the room came through the window from a street light. I took only one photo because I saw how dark the image came out. For some unknown reason, I didn’t want to try again with the flash on.

When I uploaded the night's photos onto my laptop, I could see something, even though it was so dark. I had recently learned that turning a dark photo into black and white can make details pop out, which they did! There was an obvious female upper body profile which tapered off as it went down. There looked to be a Colonial style Mob Cap on the woman also. And she was looking down onto the little bed. I think she was still lingering at the bedside of a child that was very ill, possibly close to death. This also makes some sense of why I so badly wanted to curl up in that bed.

Posted in Photographs and tagged Ghost Stories You Can See With Your Own Eyes, Ghostly Photographs, Julie Griffin, Slater Mill. 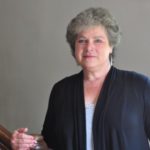